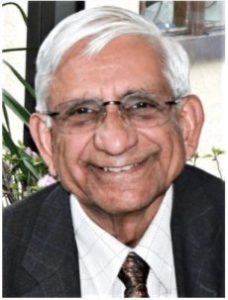 The Bal-Raj Sehgal Memorial Award recognizes an early-career to a mid-career individual for their exceptional and/or sustained contributions to the thermal-hydraulics field with a particular focus on the application of thermal-hydraulics to nuclear reactor safety.

The award consists of an engraved plaque and a monetary award of $2,000. It is awarded every 2 years and presented at the nearest NURETH conference to arrive. The recipient is expected to deliver a keynote lecture at the NURETH conference at which the award is presented in coordination with the conference organizers.

Deadline is August 1st (even years only).

A highly visible and respected world leader in thermal hydraulics and nuclear safety research, Professor Sehgal was a fixture at the NURETH conferences with which he had a special affinity, regularly invited to deliver a keynote or plenary lectures. While he would engage in serious technical discussions with his peers and colleagues, he would often be seen interacting with the younger generations to transfer his considerable knowledge and experience. He was active in TH Division affairs, serving as TH Division Chair and receiving the Thermal Hydraulics Technical Achievement Award.

Born in Peshawar in former British India, Dr. Sehgal moved to New Delhi during Partition and spent his early years there before emigrating to the United States to pursue a doctorate in nuclear engineering at UC Berkeley. What followed was an exceptional career trajectory that led Dr. Sehgal to become a leading global expert in nuclear reactor safety culminating with his professorship at the Royal Institute of Technology in Stockholm where he established the Division for Nuclear Power Safety. Dr. Sehgal was an outstanding scientist and researcher, a great teacher and mentor, a prolific author (360 articles), and a tireless servant to the community. During the course of his career, he was inducted into numerous societies and academies, notably as elected member of the Swedish Royal Academy of Engineering Sciences, the U.S. National Academy of Engineering, and the Lithuanian Academy of Sciences and fellow of the American Nuclear Society and the American Society of Mechanical Engineers. For his wide-ranging and impactful contribution to research and science of nuclear safety, he was recognized with numerous awards, including the Seaborg Medal, the Technical Achievement Award, and the Thomson Award for Reactor Safety from the American Nuclear Society. This award, established in collaboration with his family, honors his legacy.

Candidates will be evaluated according to the following criteria: